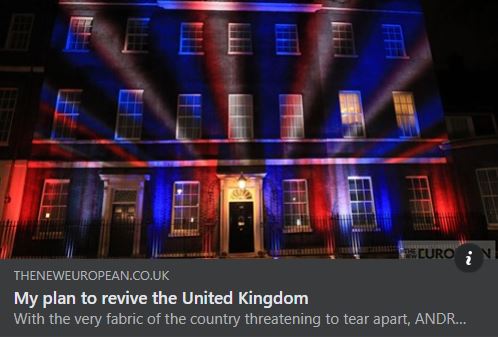 Great article – but I do worry about Adonis. A few years ago, he wrote a couple of articles looking at devolution as a response to the Brexit saga. He called for a Grand Debate or something or other. It was a positive move.

Problem was, he focused on the second referendum thing. That was always a deeply wrong idea – even logically impossible by some definitions – and Remainers finally paid for that with Boris 80-odd up.

But to get to that point means understanding the futility of that Brexit debate, and that both sides were – are – wrong, whether pro- or anti unicorns.

I appreciate where you're coming from but where is the value in saying the 2nd Ref was a wrong idea? Especially when the 1st was so flawed? And when we would have won it (and so much more so now)?
This sounds like the kind of blame-apportioning rewriting of history we'd expect from the Labour Party, say...

If someone asks you to vote on unicorns, voting against them is as silly as voting for them. But there were lots of reasons why it was a crazy idea. By some definitions, it was even impossible – to vote on a “Final Deal” while we were still in the EU.

It’s hardly rewriting history when plenty of us predicted what would happen with a 2nd ref policy. And it’s not blame-apportioning. It’s understanding the mistakes made in order to fix better the basic problems: The lack of quality democracy in the UK.

My preferred solution would be a Federation of Britain - including the Isle of Man, Jersey, Guernsey and the dependent territories. Scotland and Wales would be respsonsible- as Jersey is- for their own governance and internal constitutions; the Westminster parliament would govern England only; and matters of common interest (foreign policy, defense, and some residual others) to be dealt with by a Senate in which England would have no overall majority. There is no no point in subdividing England: there is no appetite for that.

The whole point about the people having better democracy is about a region – or federal member – having an optimum of 5 million population. Obviously, with Wales or London, for example, there will be variation.

But talking about a single English parliament responsible for 55 million people is entirtely missing the point and will reform nothing.

You’re quite right about the “appetite”. But that’s never a reason to not proceed on this course. They probably said the same, once, about Scottish devolution, a black US President, leaving the EU or LCFC winning the EPL.

This Govt is all about the opposite of devolution. Hard enough to hold onto what devolution has happened.

Well kind of. They understand the need for devolution but they will serve up a crap, fake version of it and ultimately the failures of Brexit and the danger of Scotindy will drive them to it eventually.

The comment that Johnson made about Scottish devolution being a disaster was interesting in that it was made to his MPs representing northern English areas. Cummings led the no vote, of course, to the North East referendum in 2004. That was the real story, more significant than everyone getting offended over Scotland.

I think the encouraging thing is that this issue WILL become the battleground. As it should have been years ago.

Adonis is wrong to regard German federalism as a British creation. It was based on the separate existence of many of the Laender as independent kingdoms prior to 1871 and autonomous states within the German Empire thereafter. There is no equivalent tradition in England.

Don’t need a tradition. Just need more people to realise that a Federation like this is how democracy is better delivered.

But, in any case, regions within England are pretty visible. The traditions are there.

What is happening- and particularly damaging to the Labour Party- is that alternative power centres are developing so that talented Labour politicians are not visible in Parliament, and the national leadership tends to mediocrity.

You mean like with Burnham’s Manchester? It’s a problem for very old school politics but I don’t think Labour is that these days. Starmer has talked about federatilon – and having MORE politicians necessarily leads to BETTER politicians – no matter what political tribe you’re talking about.

England itself is as far from being a homogenous political entity as the UK is. The politics, attitudes, and identity of cities like Liverpool or Manchester for instance are as distant from some of the former red wall areas no more than 20 or 30 miles away from them as the distance between Holyrood and Westminster. The overall political legacy of the last ten years of Conservative dominated government is one of profound alienation and division which will almost certainly last longer than my lifetime. Britain is a bit of a basket case right now and I can see no way to reconcile the various factions.

Devolution and federation will reconcile them. Everyone wins in that system, no one needs fear it.

Depends on the extent to which you devolve and federalise.
Certainly nothing will be resolved by basing it on a four nations model.

With an optimum – or average – of 5 million or so people per region, 12 members makes sense. For sure there is a major discussion about what powers remain in the federal parliament, which ones are devolved.

There are lots of models around the world to look at. But the interesting thing is that – as this question of competency is a mega EU issue – it’s these kind of questions that educate all of the British, ultimately convincing the EU to let us back in (with our old deal).

The problem is that the UK can never be a federation in the same way as other federal states - and looking for analogies will lead to flawed outcomes. The UK needs a two-tier federalism at least in order to manage the ultimate issue: is the federation one of the nations? or one of regions with Scotland, Wales, and NI equated with English regions? Only a relatively complex system not seen in other countries would be able to solve this satisfactorily for all involved. The asymmetric nature of the four nations makes tradition solutions unworkable.

Why can’t we be a normal federation? You seem to be saying we can’t be a 12-member federation because a four-member one wouldn’t work. Bit weird, that.

In general I’m not sure there is such a thing as a ‘normal’ federation – it is always tailored to local conditions.

But what I meant was that the UK is particularly complex because of the history of how it was cobbled together. It is supposedly a ‘union of equals’ with each nation given equal regard (not true in practice, but that’s not the point). The federal solution has to answer this question: is it a federation of the nations (which nominally reduces England’s influence from what it is now and possibly should be based on population)? Or is it a federation of regions which equates Scotland or Wales to the North East (reducing them from equality to the equivalent of an English region)?

Satisfying this question for all involved is the ultimate hurdle and requires something outside of what people think of when they think of a ‘normal’ federation (ie. equal states with equal regional representation in the second chamber).

Sure, there is history. But there’s also the future.

A federation of regions AND nations which equates Scotland or Wales to the English regions IN THE SENSE that the people in all those places have more equal, fair and quality democracy.

I understand people are going to get all emotive and caught up with the semantics around “region” and “nation”. Especially the Scottish Nationalists who seem to agree with the Tories that a 12-member federation would be wrong, that desire for England to remain as a single unit.

But, with no Scot Nat agenda, what is this “equating or demoting Scotland to an English region”? There would be no, say, Yorkshire football team, no Yorkshire printed bank notes, no Yorkshire legal system. But there would be a Yorkshire First Minister to channel the decision-making of Yorkshire residents.

I would be very concerned if I found myself arguing that some residents should have less democracy than others, as is the case today.