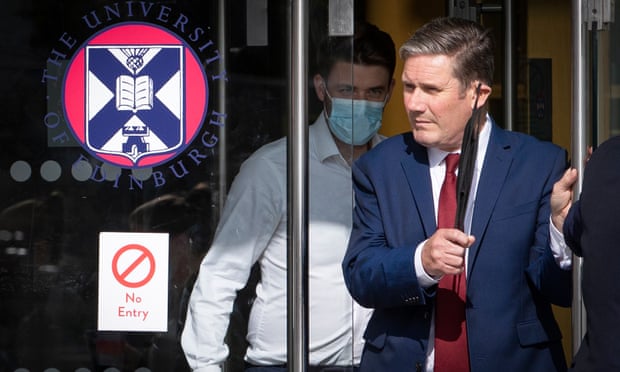 While the Scot Nat pages were joyfully jokey and critical of Starmer’s policy speech on Monday, many people seem to have missed the point. It was about Scotland, for sure – it was more about England and the UK.

Today’s article from Rory Scothorne kind of gets there. Alerting people to the point that is missed – but still missing points…

“When it comes to Starmer’s ambitions for the UK, the commission model holds a little more promise. The pandemic has illuminated England’s multiple forms of local and regional representation – and growing demands for more – which are still to be properly tied together behind a decentralising political agenda. Starmer has sought to stitch these demands into his own Scottish solution: his speech was presaged by a joint statement from 40 local leaders and former politicians across the UK demanding a nationwide programme of decentralisation. Yet Starmer should also be careful what he wishes for. England might get so carried away with its own devolutionary needs that Scotland – accustomed to receiving far more attention than, say, the north-east of England – begins to feel left out again. What happens if the Barnett formula for regional and national funding, which has served Scotland far better than Wales and several English regions for decades, comes under the microscope?”

But, I guess as a student of leftwing and Scottish politics, he reverts to type and seems to miss the point entirely.

“Starmer’s “commission” is just Labour’s latest way of avoiding an impossible task: persuading England – a country of 56 million people – to accept true parity of status with a country of just 5.5 million.”

Because the whole point of this is NOT creating an equivalence between Scotland and England – the difference in population is why that will never happen. Yes that task is impossible – which is why it won’t be a task and no need to avoid it. That’s a problem for the Tories or SNP. The logical thing is Scotland is one member in twelve regions and nations – and the standard Scot Nat criticism is that they are appalled that it seems to mean Scotland will be equal to a mere English region, like Yorkshire.

Of course, while that might be much more palatable to those English dragging their heels over such reform – that’s really just something for the British nationalists to worry about. Scotland will never be “equal” to an English region, and certainly not as an equal partner in the political decision-making of a UK 12-member federal chamber – just as many federations around the world have components that see themselves fundamentally different to the others, e.g. Catalunya in Spain, Bavaria in Germany or Quebec in Canada.