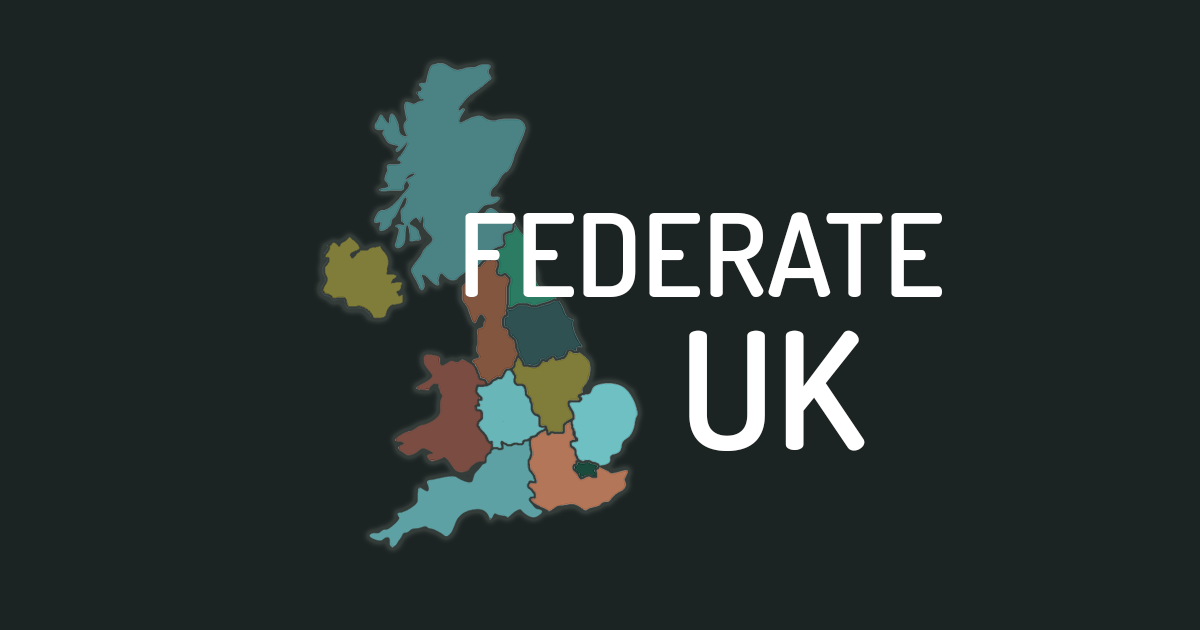 The long-term sustainable federation is something like a 12-member one, of the three Celtic nations with English regions. Take the idea to the logical conclusion, please, c’mon, chop chop.

Citizens are the root of democracy and the hierarchy of decision-making that extends through a local assembly or parliament to a federal chamber in Westminster (and then to Brussels in normal times). And as such, those local units must be as close as population size as geography and culture allows. It’s just maths. The average population size of a German or US State is 6 million (of course there is variation but not as extreme as NI, Wales, Scotland, England). This is optimum.

You can’t have a four member federation and pretend that a Scottish resident doesn’t have ten times the voice of an English one. That’s not going to win back the Red Wall.

Take Back Control. Remember that? Not so much from Brussels, from Westminster. And these ask all the same things, these referenda – “how do we organise our decision-making?”. Well, federation is the answer, as the vast majority of Western nations of a certain size employ. France and Britain, the two ex-empires, being the odd ones out.

Don’t talk to me about that fake vote they had in 2004 that Cummings won. I know the Stockholm Syndrome is strong with the British and plenty here will say it’s impossible. After Brexit, Trump and LCFC winning the EPL, I think we should redefine that impossible.

For the Scottish nationalists, I know they say that their nation can not be the same as an English region. With a proper UK federation, Scotland doesn’t have to be the same – plenty to still mark it out. Maybe even a path to an independence referendum that doesn’t rely on asking 10 Downing Street permission. And seems a bit weird to define your nation in terms of somewhere else.

But I agree with Simon; UK federation will degrade support for independence in Scotland. But the improved democracy for all UK citizens can not be held hostage to that.

Will the SNP go for it? Labour, Lib Dems, Greens and Plaid Cymru will – SNP will look funny standing with the Tories against it, and Scottish votes will be split between those two – pro-indy and anti-indy – the irony being both have missed the real solution.